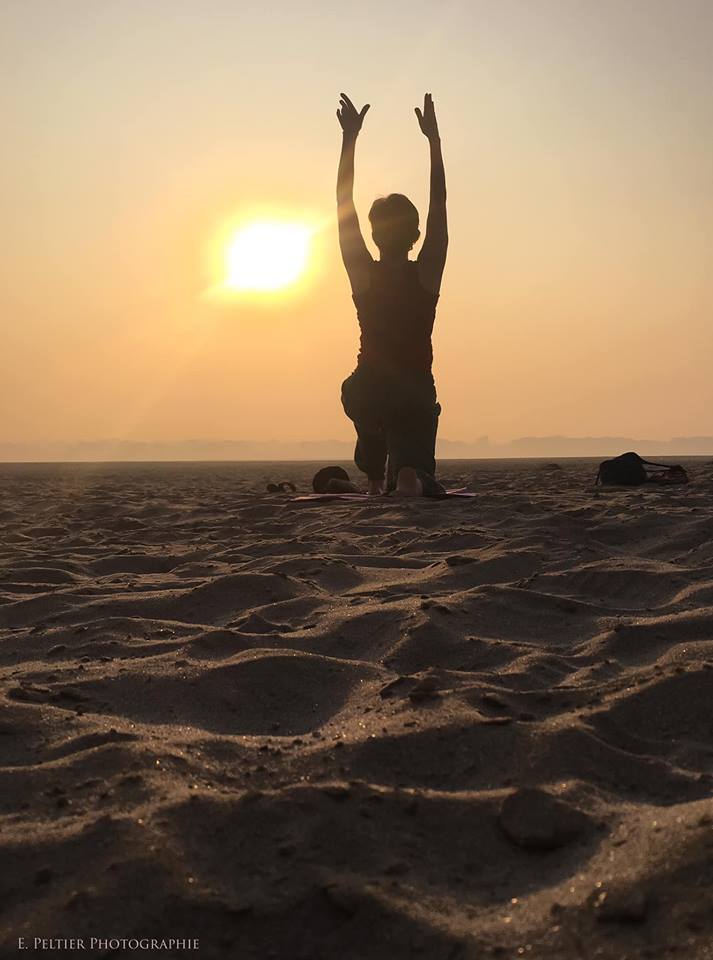 As the Winter is firming its grip upon those of us in the Northern Hemisphere, I find myself contemplating the centrality of the sun in our lives. How all life, animal and vegetable, depend upon it. How it provides us with Vitamin D for healthy bones and resistance to respiratory illnesses, and now the growing evidence that the sun improves the health of our heart and even lowers blood pressure. And then there is that whole soul-to-toe gratitude we can feel in its presence that sometimes borders on bliss, especially when we’ve been deprived of the warmth and caress of sunlight for long periods of time.

Surya Namaskar (Sun Salutation) is the perfect yoga sequence to add to any morning routine, or to do on its own. It involves a flow of forward and backward bends together with hip and shoulder openers. It’s a sequence that engages the entire body, both the right and left sides in equal measure. It can be performed at various speeds in a flow of balanced movement, offering the same time to each posture. Traditionally, it is performed at dawn facing an easterly direction, but if this isn’t possible, you can imagine the rising sun in your mind’s eye.

At the start and end of each round, we perform ‘namaskar mudra’ — bringing the hands together with the backs of the thumbs gently pressing the sternum at the location of the heart (Skt. anahata) chakra. Anahata translates, poignantly, to ‘unhurt’. This in itself is worth a few moments of reflection. The mudra is a tactile reminder of our deeper identity. Just as the sun is the heart of our solar system, the heart—not the brain—is where eastern wisdom traditions place the seat of the mind as the centre of our conscious experience. The mudra is also a reminder of the powerful connection between the sun and the heart that wisdom traditions have long known about and cardiovascular clinicians are presently discovering.

Some say that Surya Namaskar originated two and a half millennia ago, but as tempting as it is to evoke ancient mystical origins, this seems rather doubtful. The sequence is not mentioned in any text on Hatha Yoga, nor in the ancient Vedic texts, not even by Patanjali, considered the father of yoga and the author of the Yoga Sutras. As much as it might be tempting to mystify its origins, it appears that Surya Namaskar, at least as we know it today, was developed as a military exercise as late as the 17th century as part of physical preparedness training for the army of a powerful Indian warrior-king named Shivaji Bhonsle I (pronounced bhoh-slai). Yoga actually fell out of fashion in India in the modern era, but since 2016 the Indian army has begun incorporating Surya Namaskar this sequence into its training exercises.

There is a meditative effect that you can experience on your own as you deepen the practice. Coordinating the movements with the breath activates the regulatory capacities of the nervous system. Delicate, slow, conscious nasal breathing, especially exhales, calms the mind by shifting awareness from the external to the internal landscape. Each posture counter-balances the preceding one, so that the distribution pattern of load bearing on the limbs ensures that none of the joints are over-stressed. A common practice sequence is 3 full rounds, which means 6 half rounds, but even one full round will make you feel more alert and more ready to face the day. Different yoga traditions teach different variations of this sequence and if you search on Youtube you can surely find a sequence that feels right for you. In this way, you can keep a little sun within you even during the dark days.